What did you do to your rc this week?

SUPPORTER
#501
bgredjeep said:
Oh trust me, I know. I used to race 1/10th scale electric trucks in the 90s, and 1/8th scale Nitro trucks in the early 2000s (actually built and ran a track for a while many years ago). I'm just looking for something rtr to play with. I can upgrade over time as stuff breaks, but I don't want to buy something that needs upgrades out of the box to have any fun with. The yeti fits that bill, but I'd rather have a solid axle.
Click to expand...
You can pickup a decent sensors brushless setup for around $100. Just buy the bomber, better yet buy a used one.

If you are looking for an scx10 I have a brand new rtr jk for sale cheap.


Sent from my iPad using Tapatalk

SUPPORTER
#502
Didn't you just get that SCX Brooks lol!

I would say the Bomber would be the better bet. The bomber is more of multipurpose rig.

I added a couple more Jeep bodies for some upcoming builds! 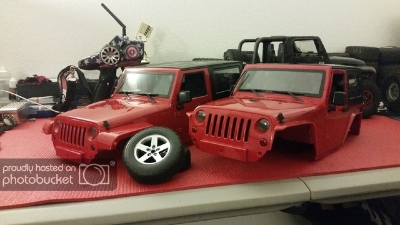 SUPPORTER
#503
I still have this rig and it has seen a few updates over the past year...and a half.

First of all, I took this to the RC4WD Challenge Series event in Disney Oklahoma last year. I took a 6th place...not bad considering I was on the smallest tires there lol 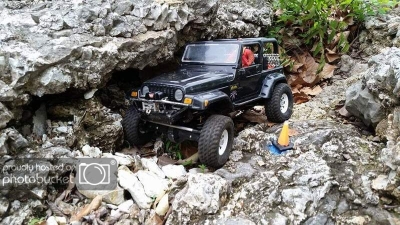 After that awesome event, it made another appearance at Frashier's Funpark. This was a team event, I teamed up with Skerb and we took the win in class 1! 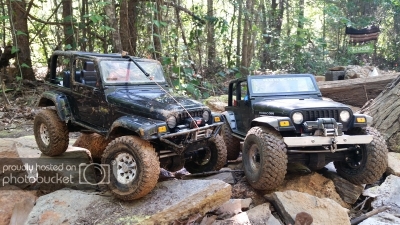 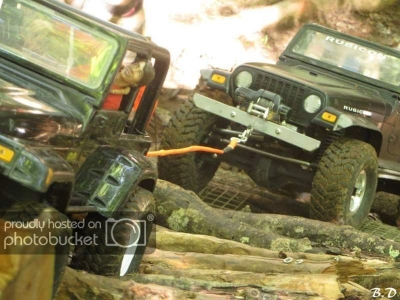 I headed down to Florida for the Killer Klowns G6 event last October. I had intended to run another rig...didn't have time to get everything sorted on that one. So, out popped the TJ and I made the decision to put the big tires on it. So, a minor body adjustment and on went some Axial Krawlers and VP OMF wheels. The little TJ didn't disappoint! It completed the 6 hour endurance run! 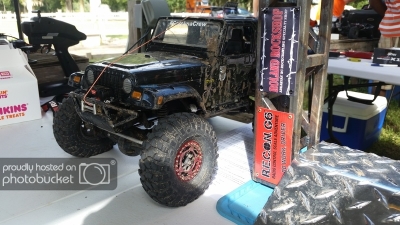 If that wasn't enough fun in one day...went right back out for the night run! 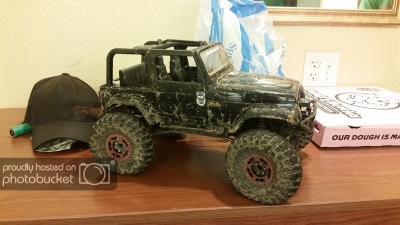 After that event, I put it on the shelf and had intended to let it hang out there.

Fast forward to a couple weeks ago. I had planned to build another C1 rig for ECSC, but I determined that I didn't have time to do it properly and get the test time in. Sooooo...the TJ got some new updates and parts!

I knew that I was going to need some bigger rolling stock for ECSC. So, on went some RC4WD Baja Claw TTC 4.19 tires! I swapped them onto my trusty OMF wheels and on they went. The hubs were a little wide...but we will get to that later. 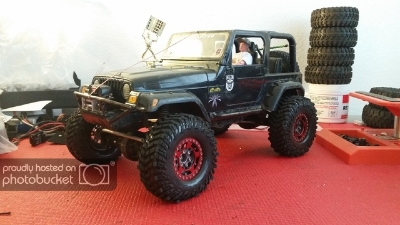 I installed a set of Locked Up Pro Hubs as well as a set of Lil' Nova dual stage foams. 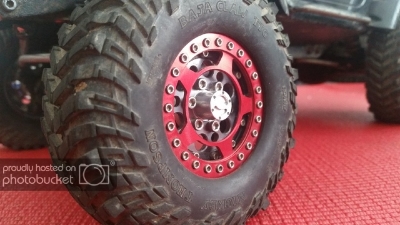 Last but not least, I installed a set of .225 SLW hubs. It pulled the wheels in just right! Not a full tire tuck, but like pretty much any lifted jeep out there...the tires stick out a bit! 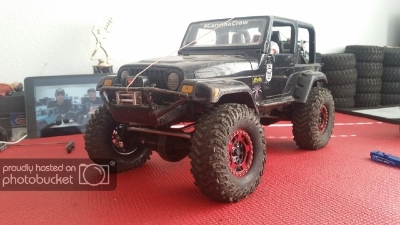 Not pictured is the new Mini 9.5 winch...will get that up shortly!

Enjoy! I am in the process of tearing the bumpers and sliders off of it for some fresh paint. After that, off to ECSC!

SUPPORTER
#504
Love that little jeep! Looking forward to seeing it at more comps!


Sent from my iPad using Tapatalk

SUPPORTER
#505
Its in a whole bunch of pieces right now. Giving the bumpers, sliders and frame a fresh coat of black paint. 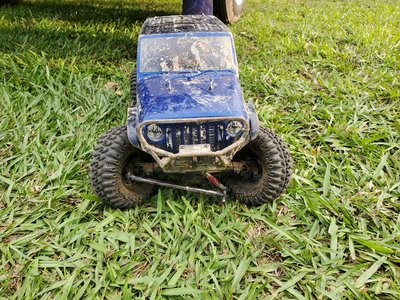 SUPPORTER
#508
LBarr2002 said:
Poor Jeep...
View attachment 20139
Click to expand...
I feel like that has happened before. I have some knuckles if you need them.

LIFETIME
SUPPORTER
#509
97TJGUZZY said:
I feel like that has happened before. I have some knuckles if you need them.
Click to expand...
Last time I broke the inner c and knuckle. I think you gave me a pair, so I still have 1 set. If you have some more stock parts though I'll take them. They are not different side to side right?

Bennett was chasing it around DJs yard and I went around behind a car and lost sight of it. I must have clipped the side of the car with the tire because it was flipped over and broke. Bennett was sad...

SUPPORTER
#510
LBarr2002 said:
Last time I broke the inner c and knuckle. I think you gave me a pair, so I still have 1 set. If you have some more stock parts though I'll take them. They are not different side to side right?

Bennett was chasing it around DJs yard and I went around behind a car and lost sight of it. I must have clipped the side of the car with the tire because it was flipped over and broke. Bennett was sad...
Click to expand...
yeah, I have a few more of those if you want them.

SUPPORTER
#511
seems fitting that this thread make a reappearance soon. I see Tripp has that bomber sitting around in his shop every time i visit. I'm itching to get my JK8 out of storage for some trail riding now.

SUPPORTER
#512
Been wanting to rehab this one and hit some trails too. Or just bash an RTR around. 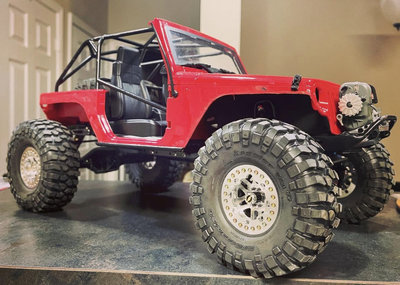 SUPPORTER
#513
Finally got a new servo horn for my Hitec 7950 for the TRX4. I had no idea the entire market had gone to a standard 25 spline count. Thats why it had been so hard to find a 24T horn for a TRX4. They use a specific offset to avoid hitting the trackbar.
You must log in or register to reply here.
Share: Facebook Twitter Google+ Reddit Pinterest Tumblr WhatsApp Email Link
Top