SUPPORTER
#1
So my addiction started in the the Fall of 2002. I searched for around 6 months for a jeep I could afford. I wanted to go with a YJ but my parents insisted on a TJ for the airbags.

The tires were bald so my first addition was some 30" TSL radials.

SUPPORTER
#2
My first real was a 2" bastard lift using Rancho coils and worn our skyjacker shocks. I had gotten 32" bfg Mud terrains in anticipation of this lift a few months before. I'll have to dig up some pictures of this stage.

SUPPORTER
#3
Next stage was 2" lift and 1" body lift with 33" bfg Mud terrains. By this time I had swapped over to 4cylinder TJ axles to get the 4.10s but was still running open rear 35 and locked front 30.

Loved these tires but sold them to go with 33" TSL radials.

I hated the 33 TSL radials so I traded them for some more 33KM1s which I grooved with a groover I had borrowed to Groove my TSLS....

SUPPORTER
#4
This was about the time I started running ATs on the street and MTs on the trail because I remember having the Grooved KM1s under my bed in my apartment. This was also around the time I decided it was time to fix the d35. I bought an 8.8 with 4.10s and welded stock d35 brackets on it. I sold the bfgs and picked up some 34x10.5 LTBs since I had tires for the road.

One trip to gulches on the d30 with 34s proved it was a bad idea after two broken ujoints and twisted ears on one shaft.

SUPPORTER
#5
I guess it was the Summer of 2007 after replacing the balljoints in my d30 and having my driveshaft disconnected because it vibrated, That i decided to put in a dana 44.

Picked it up from joe as he had it in the barn for a rainy day. Made all the brackets from scratch and got it ready to go in for a few weeks. Then pulled the 30 out and did longarms and d44 swap friday night-sat night in time to make it to work on sunday morning...

SUPPORTER
#7
Up to this point with the d44 I had only mounted my street tires because I only had one set of rims. I finally got some aluminum rims for my ATs so I was able to mount up the LTBs...on the waggy axle they looked really skinny...

It was after my jaunt up Lower 2 at tellico that I decided I wanted larger tires...

SUPPORTER
#8
So up until this point I was running the same 8.8 I had welded stock brackets on with a lockright locker in it and a Waggy 44 with a lockright and 4.10s. I knew that if I wanted to go any bigger I would have to put in lower gears. So rather than cut off the stock TJ brackets from my 8.8 I sold it and bought one with a detroit and 4.88s from a guy in NC.

While I was swapping the axle I decided to go ahead and do longarms in the rear. At this point I sold my LTBs to finance the 8.8 swap and longarms and was without MTs for a couple of months. I finally did find a good deal and picked up some 36 TSLS on beadlocks.

SUPPORTER
#9
I had handmade the brackets for the rear and my antisquat was a bit to low and I didnt have any more adjustment in the brackets so I switched to the 4Link brackets from Genright which are Great brackets!! Somewhere in all this I did an SYE and moved my rear shocks outboard. Here is a pic after the rear 4 link bracket change and while I still had the TSLs.

SUPPORTER
#10
After having the TSLs out a few times I really wasn't impressed with them in anything other than loose dirt and mud, so I sold them and picked up a set of fresh KM2s in a 35 flavor.

SUPPORTER
#11
I found that with my steering setup and the 36s and even the 35s I was having a hard time turning when not on the throttle. I had worked the summer before and saved up enough for hydro assist, but I didnt end up putting it on till January 08 I think. I didnt want to put the ram anywhere that I would beat it on a rock so I had also purchased a set of behind the axle steering arms. Well come to find out you cant run these with coils and shocks like a TJ setup, so as luck would have it kirby was upgrading his coil overs and I was able to pic up his old ones for cheap.

So this was a fairly big change. I pulled it down on a friday, and we were leaving for Aetna Mountain the next friday. Somehow with the help of alot of friends I was able to pull it off and I made it to the Aetna Run.

I dont have any of those pictures on my jump drive, I'll have to finish this some other time.

#12
Great progression...
In post #4 first pic of your rig in Shipwreck on the 34's, if I remember right that was the trip were me, you, and the dude in the purple XJ on 32's wheeled the place by our selves. That was actually the first trip I had ever taken to Gulches. Good times.

SUPPORTER
#13
01tj said:
where did the name Guzzy come from??? also how many miles do u have on it now?
Click to expand...
my grand dad had a 1978 CJ7 Renegade Levis edition with the 304 and it got around 6 miles to the gallon and they called it guzzy, he wrecked it on some ice on the way to the hunt club one morning and when I got mine we started calling it Guzzy.

#14
01tj said:
where did the name Guzzy come from???
Click to expand...
Jeeps are like pets... they have the tendency name themselves after a while. The XJ I have now named it self Blue Boy. Don't know the inspiration on this. "Blue Boy" is a 200 year old painting and later I find out it's the nickname of a head member of a notorious outlaw bike gang. The one I had before that named it self the Black B**ch.... Don't ask.

#16
Brooks, you've come a long way since the first time we went to "Red Bank" almost 10 years ago.

SUPPORTER
#17
infidel_6 said:
Brooks, you've come a long way since the first time we went to "Red Bank" almost 10 years ago.
Click to expand...
its true, that was a fun place with you and George and the guys.
B

#18
infidel_6 said:
Brooks, you've come a long way since the first time we went to "Red Bank" almost 10 years ago.
Click to expand...
What did you drive out there? Your last name sounds familiar but I can't remember what you drove or your first name. I had the 97 TJ on 32's with stock suspension. I came out there a couple times and rode with y'all. Name is Curtis

97TJGUZZY said:
its true, that was a fun place with you and George and the guys.
Click to expand...
Yea, me and my brother still talk to this day about the trips we made out there. Your Jeep sure has come a long way since I remember it.

SUPPORTER
#19
BLKJK11 said:
What did you drive out there? Your last name sounds familiar but I can't remember what you drove or your first name. I had the 97 TJ on 32's with stock suspension. I came out there a couple times and rode with y'all. Name is Curtis

Yea, me and my brother still talk to this day about the trips we made out there. Your Jeep sure has come a long way since I remember it.
Click to expand...
Thats Tony, he was in the red YJ with black rims

SUPPORTER
#20
throwing up a pic with the LTBs at gulches 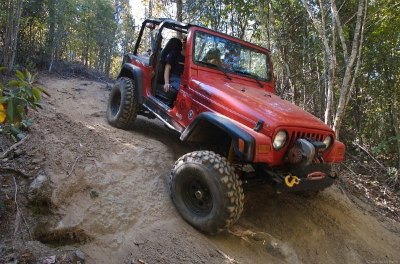